Vulcano, Aeolian Islands: a unique journey in an island full of history

Vulcano is the third sister of the Aeolian Islands in terms of size, but it is certainly the one that generates the most curiosity and passion. For decades, the island has been one of the most popular destination for tourists because of its incredible mixture of seascapes, black beaches and striking views, which are combined with the island’s history, already recounted in the time of Aristotle and Virgil, for an enveloping and unforgettable experience.
The island of Vulcano, located 20 km north of Sicily in the Tyrrhenian Sea, is at once an extreme and paradisiacal place: a natural cavern surrounded by volcanoes, which can be visited by small vehicle or by foot, giving every glimpse a view that exceeds all expectations.
From volcanoes to caves, from scuba diving to hiking: in Vulcano everyone finds a wonder to discover.

From Vulcan to the Aeolian Islands: the island in the ashes

Even among the Aeolian Islands, Vulcano is not just an ordinary place. Vulcano is what it is for the deep-rooted mythology, of Greek origin, that tells the story of the island.
It is said that Hephaestus himself, God of fire as well as blacksmith, forged weapons and armor on Vulcan itself, aided by the Cyclopes, creatures with only one eye and great physical strength. It is mentioned in the Aeneid, but other historical writers and philosophers, such as Aristotle and Thucydides, also recounted the so-called “island of the dead.” According to myth, indeed, the dead were brought to this island to be purified by Hephaestus.
The island’s current name, however, was given to it by the Romans: for them Hephaestus was Vulcan.
Nowadays the name echoes in myths, stories and local folklore, attracting tourists and the curious to discover a land not only full of charm, but told for centuries.

Volcano and Aeolian Islands: the wonders not to be missed

It is a fact that the volcanoes are the main attractions that attract tourists to Vulcano in the Aeolian Islands. There are four: Lentia, Piano, Vulcanello and Fossa, which is the largest. Hikers can enjoy a unique experience, walking hundreds of meters above the sea level and approaching wonderful mountains of fire that in the island’s history have changed the very shape of the surrounding landscape. The hike to the Pit Crater represents a unique opportunity that brings together thousands of passionate people around Vulcano every year.
But it would be an injustice to limit Vulcano to its volcanic experience: it is a lot more than this.
The places not to be missed include the black beaches, a peculiarity that distinguishes Vulcano between the Aeolian Islands and beyond. These are characteristic beaches where the vulcanic sand, is black and very thin, creating a mixture of colors and visual excitement that cannot be found anywhere else. Black Sands and Gelso Beach are among the most remembered by those who visit the island: from Gelso Beach one can also see the majestic Etna.
Vulcano is also famous for its open-air hot springs, Pozza dei Fanghi: one plunges into pools of mud and hot sea, surrounded by small hills and the fumaroles, hot air puffs that reach 80° C.
Hikers cannot, then, give up the ancient royal road, called “‘a strada vecchia”: a path that goes from Vulcano Porto to Gelso district and that represents an inescapable attraction for those who want to savor the flavor of Vulcano on foot. And like any respectable island, Vulcano offers many opportunities for a boat trip, to get to one of the caves, where you can delve into breathtaking rock tunnels.

Volcano: a unique place in the world

To recount the emotions that Vulcano triggers in a text is almost to do this island a disservice. One can try to explain the dragging sensations of standing at the foot of a crater or what it is like to feel the wind immersed in a mud pool. Or what it is like to be on a boat to cross the “Horse Cave” , with its small lakes and tunnels, or to relax on the Black Sands in front of a warm blue sea. But the reality is even better than the imagination.
It is not a coincidence that among the Aeolian Islands Vulcano is one of the most distinctive. Of such unique places in the world, few are seen. 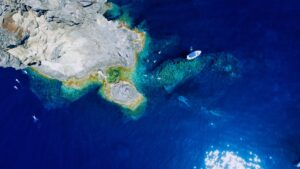 Aeolian Islands: how to get there and how to visit by boat 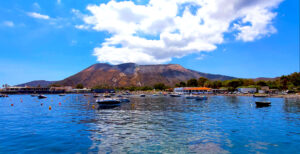 Vulcano, Aeolian Islands: a unique journey in an island full of history